5 signs that she falls in love with you | seewriteandpost.com

November 29, 2019
How do we know that one particular person actually falls in love with you? There are many types of personality of a person and to know whether they were interested in you or not, is quite confusing.

Some were just way too friendly until we ourselves get misunderstood by the gesture or the way we were treated. Some were just wanted to hang out nothing more. We thought it was a sign of someone was liking us, but it's not.

Therefore, grab your note and write it anywhere, here are 5 signs that she actually had felt for you. 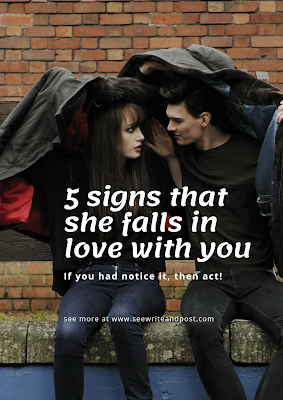 5 signs that she falls in love with you

If you notice it, every woman had a secret when coming to a person they like. Women are very fragile, they want attention from the person whom they like. They were doing any kind of action to see either that person was noticing it or not. They just wanted to be with you. Spent a little time with you to explore the side of your personality. If you are a soccer player, she will be there to support you even both of you know that it's not even official. It's kinda creepy, it's like stalking you but in a kind manner and not the scary one. She just wanted to grab attention from the person she likes.

2) She talks about her relationship status.

It makes sense, it's like bragging about her relationship status but the objective of it to tell you that she is "Single and available". She will not make it so obvious, she will find a loop between the conversation and change the topic into a relationship status (not all were like that). She just wanted to tell you to take action and ask her about it.

3) She gets to dress nicely and put a smile on her face.

Obviously, when a woman falls in love with you, she will put on a nice dress. For the same reason, for you to notices the existent of her. Look at the way she dresses, it shows how gracefully that woman was to put some effort into catching the feel of you. If you ever notice a person who falls in love with you, they would smile when they see you. A happy feel that only she can describe it.

4) She keeps looking at you.

Yeah, for some reason, it might get too awkward if someone were watching us for too long. But, here what is good. If a woman looking at you, behind your back, she likes you. And if, she ever saw you were talking to someone else, with another woman, watch her reaction. You'll know it, and you be the judge. A woman can't help it to not see the person they like, what more if the person were in front of her. She can't get her eyes to look at another person.

5) Sometimes, she can be nervous in front of you.

Believe me, some woman was too nervous when the person they like were in front of them. The same reason when a man like a woman and a woman was stand in front of him. Their heart was racing to fast. Here we are, the woman felt like that too. She just can't get herself to calm down, but trying to act cool about it. The way she talks, irregularly, but at the same time trying to cool it down because she doesn't want the person she likes uninterested. So, get to understand that. She does nervous in front of you.

See also: 10 signs he is the right one