December 06, 2019
Is it possible for us to keep this feeling of being silent about what we are? The truest-self being dismayed by the choice we pick, yet we forgot to look at the back and remembered all the good things that had been prepared for us.

Last week, I was hanging out at the corner of a cafe, and whilst I was drinking the coffee, on a rainy evening, I saw this old father was holding the umbrella, hold his daughter's hand, and walk with his daughter across the road. I guess they are moving toward the cafe I was in.

With drenched clothes, wearing slippers, and white hair, a wrinkled face, he puts the umbrella outside the cafe. I was guessing his age was nearly 60 years old. And the daughter that I thought so might be his granddaughter.

I was sitting at the cafe while updating my blog posts for almost 2 hours. And I can still see the old man and the granddaughter sitting there. It's around 7.00 pm. I was thinking, what is he still doing here for almost 2 hours? Is he the owner of the Cafe?

I felt kind of a pity for him because he looks so tired, it seems like he is waiting for someone.  And then, after 15 minutes, someone else enters the cafe, and I heard that little girl said "daddy". My guess is correct, that is his granddaughter.

I was not going to say anything, I just watch the reunion as I am watching a drama. But, I was about to shock when I heard these words coming out from that little girl's father's mouth. "Why didn't you order food for my child?"

I was at the cafe for almost 2 hours, and I saw what is going on around that hour, I saw that old man order some food for that kid without him eating anything. Just sit there, and watch that kid play some tab. With tired eyes, I think he didn't have enough money. How could someone say that to him?

I was irritated, but I can't say anything until the three of them out of the cafe. I was a little sad about what I heard and what I see. Is this the best present a grown-up adult can give to their parents for looking out and taking care of the children that they were supposed to take care of?

I was kind of disappointed somehow, but I was trying to understand the situation. Because what I see is only what I can judge, but neither behind me nor after the scene, we might never know.

A parent should be respected, though sometimes they might seem so hard on us. Or some parents might not seem like what we want to. But, the fact is, we are here because of them. Respect is what I think should be rewarded to them.

And I know, some parents seem to don't care about their children, but still, they are the ones of the reason for us to be born into this world. As we grow, our parents were getting old. There will be a time where they were called by the heavenly Father. It was sad.

Use all the time you had while you still can with your parents. Time is precious. 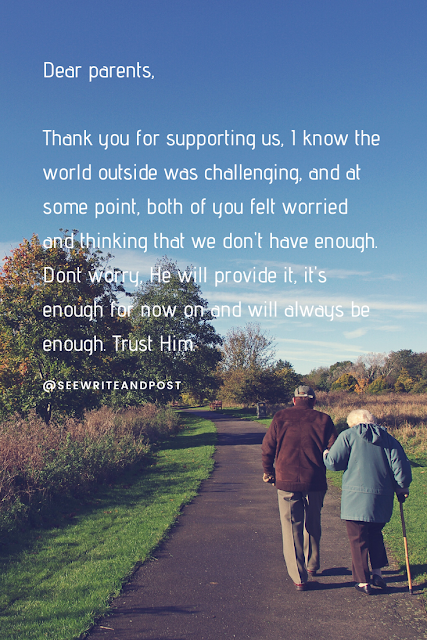 Read also:
Can I be angry in silence? Please
The unbearable pressure