January 29, 2020
One of the most quivering experiences for a teenager is Falling in Love. In definition, falling in love is a physical and emotional attraction towards another person. This happened mostly to all people. And let's talk about Love in perception for Teenagers.
There are two types of love triggered by teenagers, which are crushes and falling love. Crush is an obsession with a guy or a girl. Falling love is an impressing feeling of self-obsession so that the other person will like him/her. Generally, these two types often called "love at a young age".

For a simple understanding, we used the word infatuation which means "not real love".
Let us look into these two situations.

Nick is 13 years old. He is a brilliant student. One time, Amy his classmate borrow his science book because she did not attend class a day before. She is very polite and gentle. Amy is such a sweet girl, makes Nick's heart fluttered. On that day, Nick goes back to his home with a happy feeling. He can't wait for tomorrow to see Amy again. This sudden feeling can be just an infatuation unless they both had the same feeling. However, it is obvious what Nick felt at that time is just for a moment.

On holiday, Sarah attends campfire hosts by their school during holiday for three days. Other schools were also involved in that campfire. There, Sarah meets Billy from other cities. They were both like each other. They exchange their number phone. After finish camping, they both went back to their own school and cities. They kept texting, but little that they know, the happy feeling of texting becomes bored and just stop.

You should know the difference between sudden infatuation and a "real love" that in the future becomes your foundation for a relationship. 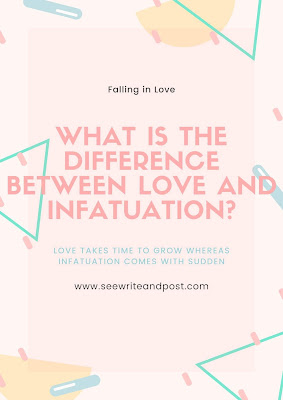 What is the difference between Love and Infatuation?

It's possible that teens nowadays have many misconceptions about love:
However, falling in love at a young age can be possible, but sometimes, it's not the right time for them to create a serious relationship. It's nothing wrong with falling in love, but wrong is when they take a different concept of falling in love and make it weird.

How to know if him/her love is real?

True love is driven by a desire to share, give and reach.

Experiencing love in the long term does not confiscate your strength, but it should give you power and strength.

There is no true love without respect. Respect for each other.

Love accepts his/her habits. Do not expect you can change that person easily one day. Accepts the deficiency.

The question here is not about the quarrel, but a willingness to make peace after a fight.

One needs time for energy, mental and physical maturity to grow.

Read also:
10 Signs he is the right one
5 Signs that she falls in love with you
Get married when you are ready