March 08, 2021
Our eyes see and record every memory that goes on in life. A blog that writes short stories, motivation quotes, blogging tips, and positive vibes.
Since a little kid, I was so in love with fairy tale stories, especially the Cinderella story. As it was shown on the Disney channel even I was a teenager at that time, I remember how excited I was to see the graphic, the dresses, the songs, and all those magical things. That indeed had created my imagination towards a magical world, as if it exists. Too bad, it's only a fairy tale. But still, it's enjoyable to see such a story. 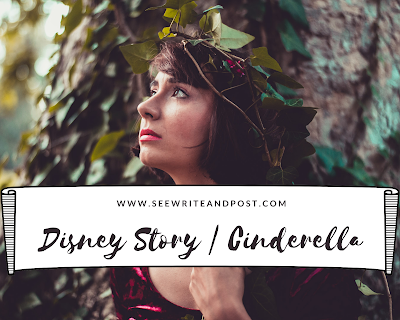 Once upon a time, there was a beautiful girl named Cinderella. Her widowed father marries Lady Tremaine. Therefore, she became Cinderella's stepmother. Cinderella had two stepsisters, Anastasia and Drizella. However, her father, Cinderella's father dies shortly thereafter. Lady Tremaine was jealous of Cinderella's beauty. Therefore, she and her two daughters make her lives like their servants and make her live in the attic, in her own house.
Even she was mistreated in her own house, she still remains kind and doing her chores every day. Her only friend in the attic was the bird and the mice. And she always protects her friends from her evil stepmother's cat, Lucifer.
One day, the King wants his son to get married so that he could have grandchildren. However, the prince did not agree with it. Despite that, the King still invites all of the eligible maidens in the kingdom to a royal ball, so that the Prince can choose his wife. Cinderella's family also was invited. And she was so excited to attend the ball. However, her stepmother and stepsister afraid if she will outstand then they are. Therefore, the stepmother intentionally keeps Cinderella busy so that she would have no time to fix the mother dress that she wanted to use for the ball.
While she was busy, her friend, Jaq, and Gus also the other animal decide to fix up the dress for her. She finished her work and the dress was beautifully done. However, when she attempted to go with her stepmother, her stepsister was jealous and angrily tear her dress into a pieces and they leave her all alone in that house.
She was heartbroken and flees to the garden in tears. In there, a magical thing happened. She met her Fairy Godmother, in turn, transform Jaq, Gus, and other mice into four white horses, and a pumpkin into a coach. She also gives Cinderella a beautiful and sparkling dress and glass slippers to go to the ball. But, with the condition, the magic will end at midnight. Therefore, she has to come home before midnight.
As Cinderella arrives at the ball, she looks so beautiful among everyone there, even her stepmother and stepsister do not even recognize her. The Prince saw her, and he falls in love at the first sight. They both dancing in the middle of everyone. However, when the clock rings, she flees from the palace, but eventually loses her slipper on the staircase. The Prince chases her but only left with one of her shoes.
Once Cinderella and her friends arrived at home, they all turn into normal. However, she realizes that her other shoes do not disappear with the magic, so she kept them. While at the palace, the Prince planning to search for the owner of the glass slipper. For whoever fits it, he will marry her. Once the stepmother heard the news, she asked Cinderella to get them ready. Unfortunately, while doing that, she overheard Cinderella humming the waltz from the ball. She realizes that Cinderella is the mystery girl that night.
Therefore, she tricks Cinderella and locked her in her room in the attic. At the same time, the Prince had come to their house. Meanwhile, Gus and Jaq helped Cinderella to steal the key for Cinderella. Luckily, while the Prince is about to leave, Cinderella came out of the attic and wanted to try out the shoes.
The evil stepmothers trip the person who carries the slipper and eventually, it shatters. Everyone was surprised, but then Cinderella takes out one of the second slippers from her pocket and wears it. It was perfectly fitting. The Prince took Cinderella and will be getting married.
THE END.

Other Cinderella story (based on my opinion):

However, the origin story of Cinderella is quite scary and unsuitable for the children's stories. But, often we only care about the good side of the story and by that, let just focus on that.
But, here the things, there was a lot of films was made based on Cinderella. A modern world and also a magical element in the film. But, whatever it is, let us check on several movies that had been made based on Cinderella's story.

My favorite films based on Cinderella:

Ever After A Cinderella story, 1998

Ever after is a 1998 American romantic drama starred by Drew Barrymore as Cinderella. But in this film, she is Danielle. It's the same concept as the Disney film in 1950, her father marries her soon-to-be stepmother, Baroness. As he departed for business, her father suffers a fatal heart attack just as he is approaching the gate.
However, in this film, it's more realistic, no singing, no bird or mice involve, and no magical thing happened especially the Godmother. It was settling in 1502 Renaissance-era France. The meeting of Danielle and Prince Henry was also unpredictable, the first time their met was unexpected. As in Disney film, the stepsister was evil, but in Ever After, only Marguerite is the jealousy stepsister while Jacqueline is more sympathetic and kind-hearted.
It is a happy ending story but the plot was much more interesting as Danielle is a brave woman, brilliant and helpful person, as she freed her family servant Maurice, whom her stepmother had sold into slavery. Truthfully, it was a mix of sad, funny, romantic, and beautiful films if I may say. In my opinion, it's the best film based on Cinderella.

Well, this is a modern way of telling the Cinderella story. I would not say that it's really a 100% cinderella story, but to include a stepsister and stepmother, it just a concept, I think. This film is a 2004 American starred by Hilary Duff. It's a modern Cinderella film, which involves two pen pals who don't know each other but plan to meet during the Halloween dance high school.
Hillary Duff as Samantha works as a waitress at the diner in the San Fernando Valley run by her stepmother, a greedy one. But she was really close with the other waitress in the diner as if they take care of Sam. Well, Sam did not only bullied by her stepmother but also at the high school.
She struggles to fit in the high school, where she was bullied by Shelby, the cheerleader. But, at the same time, she had a pen pal, named nomad, which his identity is a popular guy and also Shelby's boyfriend. So, they plan to meet up during a Halloween dance. But, as she knows that actually, Nomad is Austin, Shelby's boyfriend, she was shocked but too bad, Austin didn't manage to see her face as she had to go. Well, that part is where she was considered a mystery girl.
Unfortunately, her stepsister accidentally saw the email between her and nomad, that was actually Austin. They told Shelby and exposed her and humiliated her in front of everybody. Well, that turns Samantha into tears and embarrassment while Austin did not support her at all. Poor Samantha. It's not the end but I guess you had to watch the movie by yourself. The story is more likely a romantic comedy with a modern world.

Well, so far that's the only movie which I think is very good to watch. It's a beautiful story and a good movie to watch with family or yourself (I guess). Nevertheless, let's learn from Cinderella's story. No matter how people treated them badly, she still is kind-hearted but there was a limit when you can no longer deal with it, don't keep, stand for yourself, don't let others bullied you.