10 signs he is the right one | seewriteandpost.com

November 16, 2019
Dating can be quite scary. You don't know what would happen in the future. Some have been together for 10 years but eventually split up. Therefore, to have a serious relationship is to know that he is the right one for you. But how? Here are some signs that he is right for you. 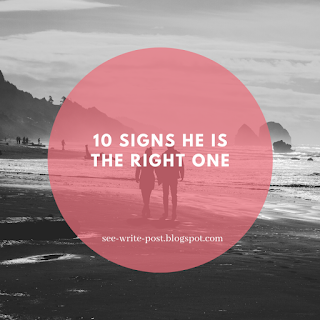 10 Signs that he is the right one for you:

1) You can communicate well with him.

Often we heard that communication is the key to a successful relationship. If you can't communicate well with him, what is the point of being together?  By communicating, you were able to express all of your feeling towards him.

2) He gets along with your friends and family.

3) You are comfortable with him.

And yes, the sign that he is the right one for you is when you are able to be yourself in front of him. It is not about how much you put on your make up. It's either how you act in front of him, you are comfortable because he understands and accepts the way you are. You can easily speak up your mind, and he can blend with you. There is chemistry between you and him.

No matter how many flaws you have, what you look with or without makeup he accepts you the way you are. instead, he will make you be a better person than before.

5) He respects you well.

He respects you as a woman. He understands and makes the best out of him. He will not ask for sex or touching your body for his satisfaction. He respects you and loving you for who you are.

6) You trusted him and he showed you that he dependables.

The next sign is when he shows you that he is a very trustworthy person. You trust him, and he appreciates you as his partner. He paid back your trust by appreciating you, respects you, and keeps believing in each other.

7) He sacrifices his time for you.

Trust me, when a guy spends his time for you, to listen to what you're going to say, to see whether you are in good condition without you telling him to do so, marry that guy.

8) You survived a long-distance relationship.

For a long-distance relationship, you need to trust each other. If he ever believes and still hangs on to you, waiting for you, that is the sign that he is the right one.

Of course, it's hard for us to see whether he is really working hard. But, if it ever happens while he works hard, but still he can make you his priority, don't let go of that man.

A man is very serious when he said he wanted to marry you.

Here we are, the 10 signs show that he is the right one. I hope you find the right man in your life.
Read also: