November 25, 2019
Have you ever been in a situation where you judge people too soon after seeing them for the first time? or judging other people by the story told to you? Admit it, we all been in that situation. We judge too quickly even we don't know the truth of it.

We heard about people's backgrounds and we believe exactly like what we've been told. But, when coming to the truth, we can't even differentiate which stories should we believe in. Sometimes, the stories behind everything is too hard to believe. If you want to know the truth then get to know them.

Befriend can be so hard because you still in adjustment to know about them. Especially if that is your first time meeting them, you feel awkward around them. The only way for you to adjust to a different environment is by just getting into it. Let's broke that awkwardness by deal with it.

Somehow, we are the one that got judge by others. People heard about us, but some of it may be true and some of it may not. We knew we are imperfectly made, and making mistakes over and over again. But, that doesn't mean that we can't be better people. Some part of us still developed and learning a process. Because of that, we can't let what people judge us to be the center of the point.
It becomes a trend of becoming a judge for someone else's. I once believe that the word spread on a person was true. But, after I try to know them more, there are pros and cons. They did have the bad sides but they also had good sides. Even they had bad sides, it's not our job to judge his or her way of living. It's their choice and let them be what they want to be. 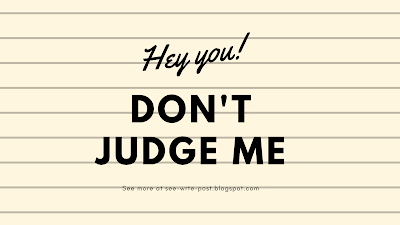 Judging can hurt someone
As we can see, the world is spread with negative comments to poison the human mind. I am not a good person, neither humble nor good with the word. But, we do know that to know that person's life, you had to befriend them. Know them better and accepts both shortcomings. We can't judge others by just listen to a story. Who are we to judge others? Nobody. We just like everyone else, trying hard to make a better living.
It's not our business to judge others based on what we think he or she should do like what we told them. Everyone had a choice, but still, we can give a comment if that person asked for any advice. But never judge them on everything they do, put yourself in that person's shoes, what would you feel?
Read also: