December 14, 2020
This story happened ten years ago when I was still in college.
During that time, we had a semester break. You can either stay in college or going back to your hometown. But, since I was saving my money, and my hometown is too far away. I refuse to go back and choose to stay in college. Things that I hate the most during the semester break is the quiet environment. And all of my friends were planning to go back to their hometown.
The semester break is for two weeks.
For three days, I was still together with my roommates. I thought that she won't be back in her hometown back in the day. We stayed four people in the dorm. My two roommates were already going back to their hometown two days before the semester break and my other roommates were still staying in the dorm, so I felt a little at ease for a moment.
However, she suddenly told me that she will be going back to her grandmother's house in an area not far from our college. So, I thought "Oh Okay", I responded with disappointment because I was scared to be alone in that dorm for one week. At first, she asked me to join her but I felt it's too much for two weeks.
Like any other college or school, there must be one horror story that had been told from senior to junior. But, this story had been stuck in my mind. According to my senior, the block we were staying in had a lot of unspoken stories. Our block was nearer the forest and supposedly something had happened many years ago.
Our college divided into two blocks, one is for girls and the other one is for boys. The boy's block was far away from the girl and only had two blocks. While the girls had four blocks and divided them into four A, B, C, and D. The nearest to the forest blocks A, which in turn where I stayed.
The feeling of fear and restlessness haunted me, well, because I am a coward. Our blocks had four levels, and thank goodness we were at the first level. Level 4 were empty by the staff because there was a case, the student was lock in the lockers and unfortunately, she died because there's no enough oxygen. How she gets there was still a mystery to everyone.
Fortunately, there still some students at our levels, and I'm not feeling too lonely. For day one of being alone, I tried to be brave and think positive. However, I can't fight that fear inside me. I turn on the lamp all night long, and there's one time I didn't take a shower because of the broken light in that bathing area.
I can hold for two days, but on the third day, I was not able to control myself anymore. On day three (Wednesday), I was trying to close my eyes but I just can't do it. So, for the whole night, my eyes were open and can't even sleep, maybe because I turned on the lamp. Then, at that time, I heard a weird sound.
In incident one, I heard like a pencel drop neared our study desk. The distance of our bedroom was not very far from our study desk. It was weird maybe because of the wind I thought. Incident two, the memo that my friend stick in the wall was falling, like why at that time? And the next incident is what made me open my eyes for the whole night. I heard someone was coughing and pull the chair in our study desk. I didn't even dare to go check for it. I was so scared.
My heart beats so fast, and it even unfortunate that I don't have any phone, no WhatsApp, no media social, or anything at that time. So, my communication was so limited. I plan to go out and run to the nearest room, but it was 3.00 o'clock in the morning. I tried to stay up until 6,00 o'clock under the blanket.
As soon as the clock at 6.00 o'clock I run to the bathroom, wash my face, brush my teeth, and run to my dearest friend's block that is in Block D. That's too far away, but who cares at that time. I'm so glad that she was still there because she planned to go back to her hometown that Saturday. Luckily, she was still there. So, I told her everything, but she laughs at me.
But still, she accompanies me to get my things, and she said: "you can stay here with me, cause I won't go anywhere. My parent was not around at home, so I choose to stay here. (laughing). But why are you so coward?".
Thank God, I stayed with her the whole semester break until my roommate gets back. But, reminiscing that time, I was really a coward. When you are alone, anything can happen if you let your mind control you. So, just think positive and focus on what you want to do, in that case, everything will be fine. Just fine. 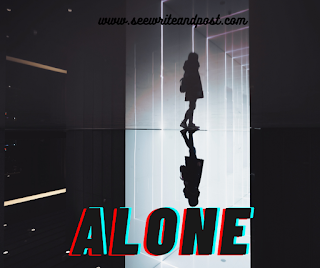 I love to hear your thoughts. Thank you