A story untold by a best friend | Short Story

March 15, 2021
A secret is like a glass that you have to protect from breaking. Once broken it will spread all over the place. Even though the pieces of glass has been collected, it will not be the same as before, it's scattered. Therefore, it must be protected. 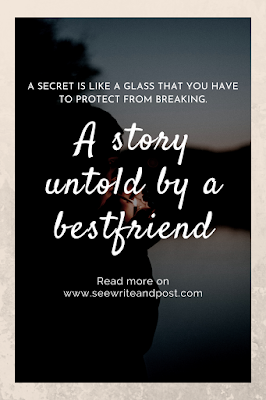 "Luna Gorge, wait for me!"
She stops, and when she turned her back, Mariah was running to her and patted her back.
"Let's go lunch together."
Without saying much, they just walk to the cafe together.
Luna Gorge, a sophomore student with, good background of studies, always with her book, and had a little socialize time with others.
Luna and Mariah met the first time, during their orientation handled by their course program. Mariah is a year older than Luna, and she is a third-year student. They became so close during the orientation in which Mariah is the facilitator.
However, their relationship was being misunderstood by the other student because the way both Luna and Mariah interact was being more than a friend.
So, from that, Luna tried to step back and tried to not get too close to Mariah.
Though the gossip went wild between her and Mariah, it does not affect their friendship.
Luna is an independent girl, who's in her 20s. She was away from her family, back in the first year she was in the Universities, she manages all of her things and especially her life.
However, the gossiping that went viral between her and her best friend, Mariah had struck her emotion because she was afraid of what others' perspective towards her.
Mariah on the other hand is a party type of girl. She never complaints about anything, and she is very open-minded with her circle. While Luna has a very normal life, Mariah's stepfather is very well known.
In other meaning, she is a rich daughter of Mr. Brenkly.
When the gossip went all over the universities, it didn't bother her that much.
Her personality is much more like just let it be, she doesn't really care about anything.
One fine day, on a weekend, Mariah invites Luna to go to a cinema. But, because Luna knows that people might talk a bad thing when they are two of them, so she decided to bring Jackson, her male best friend without Mariah knowing about it.
At 10 in the morning when they all arrived at the cinema, Luna told Mariah that she will bring someone to the cinema.
As he came, Luna introduces him to Mariah.
Little that she knows, when her friend, Jackson came, the expression of Mariah totally change. Neither she hate it nor not, she keeps quiet.
As they walk together, Luna was with Jackson all the time and they were talking and laughing during their outing. Until one time, Mariah felt a little agitated when she saw Luna and Jackson were having some fun time.
Mariah felt being left alone.
The next week, Mariah came to see  Luna. While talking with her, Luna told Mariah that she and Jackson became more than just a friend. Mariah was really upset when she heard Luna saying Jackson's name.
Out of nowhere, she stands up and gets away from Luna without saying anything.
Mariah being silent for a week.
In their universities, there was a website forum where students can post about anything. Not long after, there was a rumor that came out from the forum posted by anonymous saying that Luna and Mariah are actually in a relationship.
After hearing the nonsense rumor, Luna locks herself in her room and crying while Jackson came to her comforting Luna.
One day, Jackson called Luna that someone follows him and broke into his rent house, instead of stealing anything, the robberies just destroy everything.
Jackson suspected that this might have to do with Mariah, but that's impossible.
But then, after a while, after the police were investigating the house, they found one of the robbery identity cards.
As soon the police obtained the robberie, then the person told the police about the truth
It was Mariah.
While hearing the name, Luna was shocked. It became a question mark for Luna of not knowing what happened.
After that incident, Luna never saw Mariah again.
Six months had passed.
One of Luna's friends told her that they found out who was that person posted about her relationship with Mariah a long time ago.
It turns out, Mariah was the one who spread the rumors about the fake relationship.
That in turn, make things became weird.
The secret Mariah kept all along is she's in love with Luna but never really wants to admit it.
A best friend that she thought her really best friend has actually had a crush on her. It didn't go well.
Disclaimer; The character and name used in this short story are a made-up name and it is based on the author's imagination. Any resemblance to actual events, locale or persons, living or dead is coincidental.
Read other Short Stories:
The darkest secret - Short Stories