I almost killed myself - Real story

I was born in Christians families, and I am thankful because of that. But, one thing for sure, it doesn't matter what religion you are, one person will always face a situation where he or she can't get enough of it.

When I was a little child, I ought to not think about the world ahead of me. I just live in this world and hope that everything will be prepared for me by my parents. I always wanted to take something for granted.

As I grow up every day I was asking about my self of what I'd be if I become like this or what it be if I choose that. I am very sad to know that my life was full of questions. But, I still walk with my life and pretending that everything is okay.

I am a very good Christian child, I was thought about a good thing and expose to have a good manner. However, there was sometimes I question my faith, and as I growing up and meeting different people from all around the place, my faith was started to fade up.

In the year 2005, suddenly, I was diagnosed with depression. I kept quiet and tried to keep it by myself. I didn't brag to any of my family nor friends. I remembered how pathetic my life was in that time. I was around 22 years old at that time. I am still young blood and haven't ready for the cruel reality of the world.

I was exposed to the reality of the world, where I can't find any peace and started to label myself as someone who had no future. I forgot where did I started to feel like I am alone. Little that I, I actually lacked spiritual for almost 2 and a half years, I am trying to search my own path rather than listen to what God had told me to do. Mostly, I do what I like. I was pursuing something that I should not have done to.

I was defeated by the darkness of my ego, my intelligence that brings me down and I was living like a dead person.  I pray I sing but deep inside my heart I know that I am pretending. I was torn and ate by the depression. At first place I was thinking, what did I do until I get to this point? I am hoping that people will always be surrounding me.

Truthfully, the most basic things I did until I was so away from God for almost 2 or 3 years because I was comparing myself to others because I can't get what I want, I was broke, I had heartbreak, and most of it, I don't have anyone.

It is understandable why a lot of people suicide because they felt alone and feeling that nobody was there during their outbreaks.

Honestly, I don't have any problems with anyone, not even my parents or friends. I am okay with everything, but, what makes me felt like giving up because I feel really alone. If I see back about what going on in my life, nothing wrong, it just me.

Until I felt like I had this mental illness because, at one time, I wanted to kill myself. I was into this depression myself because I seem everything was not okay with what I plan with. Because of money and I was felt like I was far behind everybody.

Then, something happened to me, after all these shits that happened, I tried to look back and understand one by one. I didn't get any answer. it all started with me. Because I was thinking too much and thinking that I am able to go through everything with my own self.

Unfortunately, it's not like that. I had no one beside me although they were physically there in front of my eyes. But, I can't speak to anyone about what I feel, I didn't trust anyone. At one point, this depression eating me up. There's a little voice said I am not good enough, I don't have the future, I will not get married, I am going to die at a young age, useless, hopeless and you nothing. I cried and prepared something horrible to happen, I was about to end my life but then, everything turned as what I did not expect.

It's a week before I planned to do something horrible, I was in this bus stop, I was planning to walk see the sunset before everything went black. I don't think I can make it.  Suddenly out of the blue, this old man, saying to me "I lost my child when he was just 18 years old. He killed himself." I was shocked because I did not mention anything about suicide, and that man suddenly appeared and talk about that.

And I was asking, why he do it, that old man said, "I think it is our fault because we as a parent were not aware of this thing. We taught him to be okay, I am also don't know why is he doing that. But, I guess, young people are so fragile. I'm a bit disappointed and angry. But, there's nothing I can do about it. My wife left me because of that and married another guy. I have nothing left".

Then the bus arrived, and he gets on that bus. Later I understand that is God is trying to tell me something?. Suicide is not the answer to everything. In fact, it troubles other people. I can see that grieve from that old man. though I don't know what the real story is. I can see that the old man blaming himself for a thing that he didn't do.

And I was thinking like, what the hell did I do? I find that it is such a weird thing that happened that day. And until now I will never forget how that old man spoke out of nowhere. I never saw that man again. I felt a little bit scared. However, it's relieved that something speaks about suicide. And after that incident, I never think about suicide anymore until now. I still had depression, but I learn to share it with my counselor, because what just happened really freak me out.

No matter how hard our situation is, Suicide is never the answer. 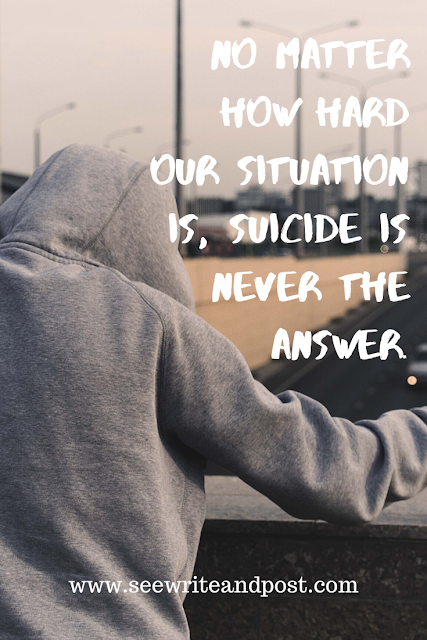 See also,
Breakthrough your fear
Why you should not compare yourself with others?
Labels: shortstories