Yes, she, Jane was shocked when she met with Bresley's parents for the first time. She doesn't know how to react, either wanting to shout, cry, or get out of that house. But surely, she was astonished, irritated and angry, when she seeing his parents.

"That was my father, was... a long time ago", said in her heart, then her eyes began to tear up.

They all were started to look at each other.
What's more irritating was her father doesn't even recognize her, his own daughter.
Jane just stood there, saying nothing, and can't even look at her father. A moment later, she gathered herself and said;


"I'm sorry, but I had a thing to do, I am sorry but I need to go back right away. I'm sorry Bresley. You had such a lovely family."

"What?" said Bresley.
She just storms out of their house while Bresley trying to chase her.
But Jane let go of Bresley's hand and run out from their house.
She doesn't care how far she walked or how much money wasted to travel to get to her home. With tears running through her cheeks and felt agitated, she just walks, grabs a Uber, and returns to her home.

As she arrived at her home, she runs to her mother and hugs her.
Her phone was ringing at that time, Bresley was trying to call her but she ignores it.
She didn't tell her mother anything. She goes to her bedroom, locked the door, and just stares at the ceiling while remembering what was happening on that day.

The next morning.
Jane came out of her room. Her mother was preparing some breakfast.
Out of the blue, Jane asked her mother

Susie interrupted, "but we still make it, right?"

Jane asked with an angry tone, "Don't you feel angry? what would you do if you saw him again?"

Things get dissonant. Her mother puts the coffee mugs. Then, Susie continues.

"Sometimes I get angry. Things like me and your dad. I know this had affected your life, you don't deserve this. You are a smart kid. But, honey, he is still your father, and I still loved him. But we can't force someone to changed for us, right? I respect his decision, and if I had the chance to see him, I am glad. Glad to know that he's okay."

Jane can take any longer, she spills the truth about Bresley, and his father was her father too.

Susie takes a sip of a coffee and respond;

Jane became silent, but whatever the reason is, she understands it. She knows her mother's message to her was, grow from that pain.

It does take time for that pain to be healed, but remember the long journey she was with her mother, reminds her that, that biggest crisis doesn't make her quit just like that, but instead, she grows from that and able to support her mom, her family. Things might get awkward for her and Bresley, and how she will react to her father. But, above all that, the thing that catches her strength, is to never let the past destroy her will. 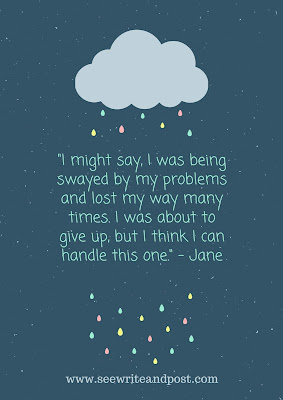