"Lots of people want to ride with you in the limo, but you need someone who will help you catch the BUS." ~ Oprah Winfrey
Every relationship has on and off. There were couples who overcome the obstacles but there are also losses to challenges. Although we dated for almost five years, it does not promise anything. We both had a different background.
While others having a good time with their families, I didn't. My mother was hospitalized. She had cancer, while my dad left us right after my mom had me. I was the only daughter. I took care of her since I was still a kid. My goal is to make my mother happy, she supports my dream, even in my relationship. She would be happy if what I make in life makes me happy and it's enough for me to see her smile.
I had many friends, but none of my friends were really my friend, sometime I get bullied, sometimes I was left behind as if I didn't exist. My mom is the only reason what made me who I am today. We were poor. The cost of her treatment was expensive, I had to do two jobs in one day. 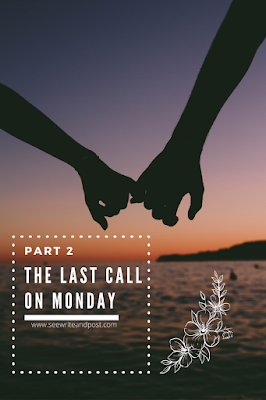 After a 5 year of the relationship, I felt blessed because there was someone that does care about me, always asking about my situation. At last, someone who appreciates me. How can I thank you enough for everything?
He was full of mystery. He was a solo painter artist, he had his gallery studio. He works by himself. Surprisingly, his work art received a lot of support from his fans, I was proud of him. But there is one thing that makes me still wondering, he never talks about his family neither I had no courage to ask about his family.
He was a quiet type of person.
In mid-august, he invited me to his studio gallery, and it was 7.00 o'clock in the evening. After I finish my work, I go straight to his place, and it was dark inside. As I enter the front door, he lights up a candle, and there were red petals all over the floor, he came out with a candle in his hand, and a small box for me to open.
White the small box in my hand, he turned on his phone with song music of Happy Birthday. It was my birthday, I totally forgot about that. That's not just it, there's more. He gave me a white rose and asked me to open the box.
Speechless for a moment.
He bends his knee, and asking me "will you marry me?".
I said Yes.
My voice was shaking to accept his proposal, I was happy, surprise, and too joyful. Then, he puts the ring on my finger. I was so excited to tell this my mother.
But, things were not like what I expected.
To be continued in Part 2.
Read more:
Part 1 - The last call on Monday
Part 3 - The last call on Monday
Labels: shortstories