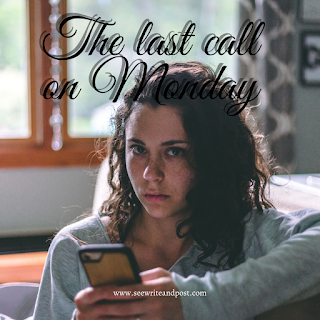 Truthfully, I enjoyed that moment when he takes out a small box from his pocket and asks me to open it while he sings a happy birthday song. Thank you for this memorable moment. I didn't expect that you showed how serious you are with our relationship. I can't wait to tell this good news to mother. Imagine how happy she was when she heard that her only daughter will get married with a person who really cared about her.
I was about to tell her the next morning, almost.
In the middle of night, around 11.00 o'clock when I was at my apartment, my phone rang. As I answer that calls, it was from the hospitals. I silence myself for a moment, I can't talk about anything, I wanted to ask but I just keep quiet. The person were in charge in calling me hang first, then I slowly put my phone down.
The first thing I do was calling him, as soon I heard his voice, my tears running through my cheeks and I cried, can't even speak. He didn't respond anything though, he just said "wait for me". A few moment later, I heard a door bell, I opened it and he hug me tightly. I know he already knew what it's about. My mother died at that night.
I was blaming myself for that one year because I was busy with my life, my goals in relationship, but I had no time seeing my mother. I felt guilt. Fortunately, he understand it all and he will take care of me from now on. I know it so sudden, but we plan to registered our marriage without any ceremony.
Nevertheless, before we were officially married, everything was a mess. His parent does not know that their son was getting married. And the second of it, I was getting blame due to their son's choice. They hated me, because I was below of their standard. Like I said, our family were so different, and they already set a standard for their in-laws.
There's a quote, "If she's your girl, stand up for her."
It was a disaster, his mother came at that hotel I was working with, and humiliated me in front of my colleagues and manager. While his sister, spread a rumors about me dating with his brother for a money. I was in despair, it's not that long my mother had pass away. I was in depression, and I don't who to talk with. While his family tortured me, he was giving me an excuse that he was busy with his art gallery.
For almost two months, I was under stress. I went to his gallery studio but he wasn't there. I am sure he is somewhere with his family. For the next three months, we rarely texted me nor called me. The promises he said to me, the ring he gave to me, I left it on his gallery studio.
He's gone, like out of nowhere. I was left behind again.
Afer a while, it's been six months now and it entering the New Year. I was about to move on with my life, but then, I got a voicemail. "My family threatened me to ruin your life, if I still be in contact with you, I'm serious with you but they gave me no choice. I hope they happy when they know I was no where to be heard, or to be seen.  Don't tell them anything, you're strong, you can live without me. Forget about me and move on with your life. "
I'm a bit disappointment. His words broke my heart, like this is the end of his world, and he did not fight me for him. He just disappears. He was gone, like I don't know where he goes. The last thing I heard from him is from the voicemail, it was on Monday on January 2006.
But, I'm still hoping. Where are you right now?
Read more:
Part 1 - The last call on Monday
Part 2 - The last call on Monday
Labels: shortstories