February 03, 2021
See, Write, and Post-it. Our eyes see and record every memory that goes on in life.
Every day is a new beginning; it's never too late to plan on something and start again. As long as you still breathing and had the strength to move on, you can, and you will always starting to get up again.
To take the first step is the hardest thing, but once you're able to walk through it, you can make it. All of the obstacles in front of you can sometimes tear you apart or make you weak. It's not easy, but giving up is not a solution. 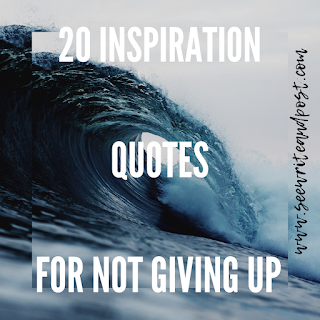 You see, we might have a phase of not gonna make anything, but some people end up being successful on their own timeline. It's not magic, but it not a giving up attitude. 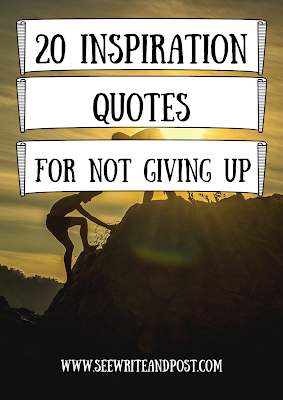 20 Inspirational Quotes for not giving up

April 02, 2020
When I decided to start a blog, I choose the Blogspot platform because it's easy to monitor. Read also: 5 reasons you should start a Blog | seewriteandpost.com And if you wanted to have a more professional blog, you should have a domain . Domain vs Subdomain? A domain  is an address of your website that people type in the browser URL bar to visit your website. A subdomain is a domain that is part of a larger domain. Meaning that it is an additional part of your domain. For example, my first blog was named see-write-post.blogspot.com (subdomain), which I change to  www.seewriteandpost.com  (domain). Unfortunately, Blogspot does not provide a domain for a country such as Malaysia. So, in order to have a domain, you have to buy it. So, in today's blog, I will teach you how to buy a domain and hosting from the  NetKL Network  website. Why choose NetKL Network? Through this Website, you can learn more about their services and their offering apart from sel
Post a comment
Read more

April 01, 2020
What is Depression? Depression is a mood disorder, it is a feeling of sadness , a loss , and  anger  that interferes with a person's daily life. It is an illness that can be treated but also can lead to an emotional and physical problem affecting a person's activities either at home or work. According to the American Psychiatric Association , depression symptoms can vary from mild to severe, the symptoms must last at least two weeks for a diagnosis of depression. Feeling sad or having a depressed mood Loss of interest or pleasure in activities once enjoyed Changes in appetite Weight loss or gain unrelated to dieting Trouble sleeping or sleeping too much Loss of energy or increased fatigue Increase in purposeless physical activity or slowed movements and speech Feeling worthless or guilty Difficulty thinking, concentrating or making decisions Thoughts of death or suicide https://www.statista.com/statistics/1019587/malaysia-prevalence-of-mental-health-is
3 comments
Read more

How to change your URL Blogspot to the custom domain using NetKL Network 2020?

April 04, 2020
To make a website, you need  Domain and Hosting. What are Domain and Hosting? A domain  is the address of the website, for example, www.seewriteandpost.com . A Hosting is inside the server to store website files such as pictures, writing, video, audio, and others. Read also: Tutorial on how to buy the domain and hosting web from NetKL network 2020 However, for URL Blogspot, you do not need to buy hosting because the Blogspot itself is hosting. You just need to find a domain provider such as GoDaddy.com, klserver.net and NetKL Network. But, I prefer NetKL Network. To know more about this website, click here, NetKL Network . Photo by mohamed_hassan So, let's get started. Step 1 - Click the NetKL Network website, and it will look like this. Then, click Domain > Custom domain services > Use at Blogspot.com (without email package). Step 2 - Choose the CDS Blogger Plan (without email package) with only RM10. The description is shown
Post a comment
Read more

March 27, 2020
There's a quote says by a famous person, "If you find someone you love in your life, then hang on to that love." - Princess Diana. Twelve years ago, I had a crush on one person. He played the guitar at the church. He was a best friend to my other friend, so I'm not really close to him. He was funny and sometimes quiet too. I was interested in his character. I was 16, and he was 18 years old at that time.  Well, you know what people say, love is blind for a kid, and I realise that I was still underage at that time. Having a relationship is not my kind of thing when I was still 16 years old. But still, having a crush is not a crime. So, I kept that feeling until I was at college. At the age of 18, I got an offer to school away from my hometown.  Because I kept my feeling for so long, sometimes when I return to my hometown for a semester break, I will give him a present. Looking back on that memories, it was funny, though. He was 20 at that time. Sure did, I tried to
Post a comment
Read more

Lisa Maurie
I'm 29 years old. I'm staying in Kota Belud, Sabah. Begin blogging in 2019, and writes about the short stories and some blogging tips. I'm a full-time student and blogging is some part of my interest.